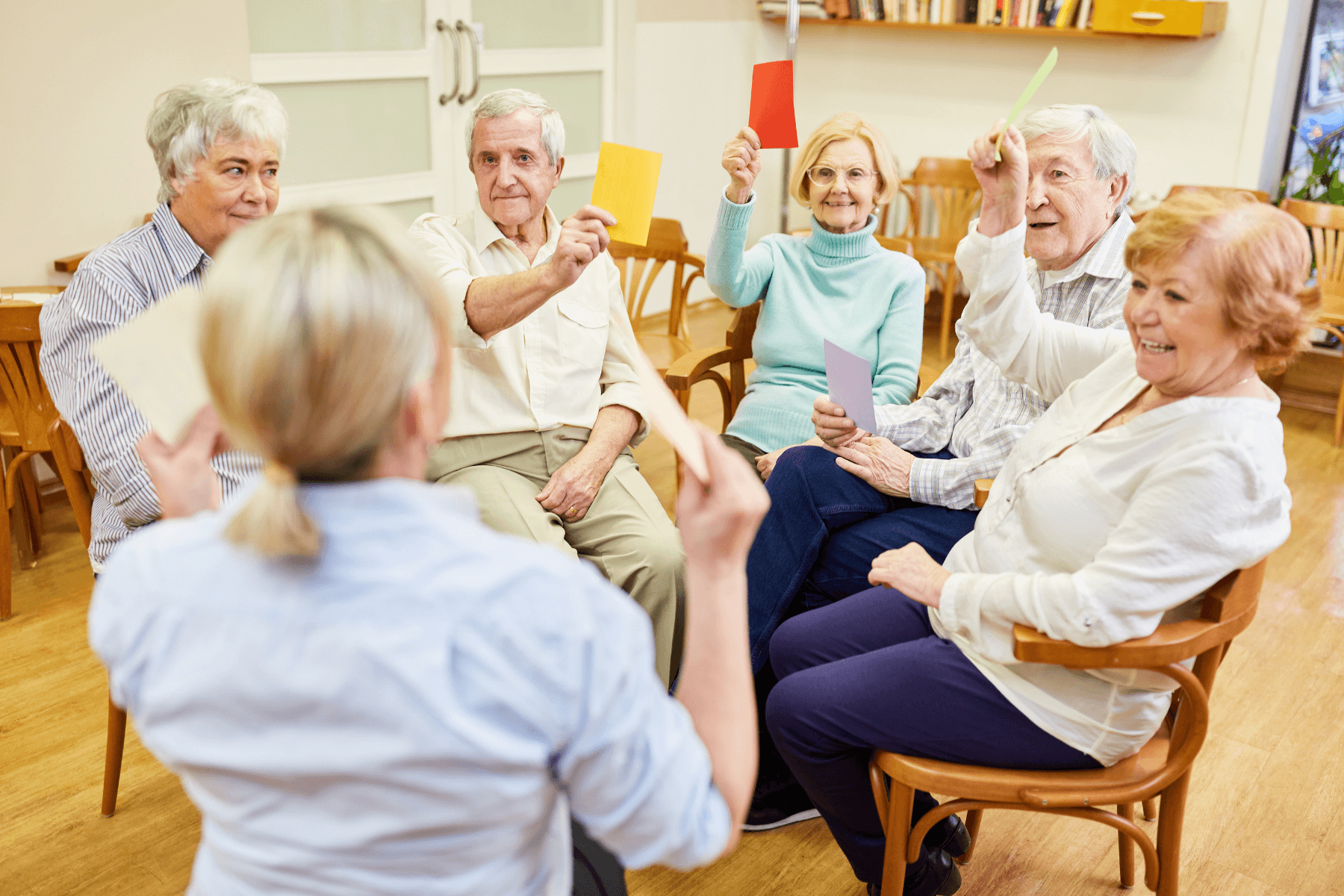 7 Brain Games to Support Cognitive Function as You Age

Cognitive decline is a natural part of aging, but you can likely stave off and reduce some of the effects. Staying as sharp as a tack may be as simple as enjoying some games. Whether you play with fellow Collinwood assisted living community residents, family or online, brain games hold many benefits.

Since its invention, chess has been associated with brilliance and quick thinking, so it’s no surprise playing it helps support cognitive function. To win at a strategy game like chess, you have to compute many scenarios and recognize patterns in the gameplay. It’s likely that forcing your brain to practice in-depth computations and memory tasks like pattern recognition help stave off cognitive decline. Some studies even appear to show a correlation between playing chess and dementia prevention, but more research is needed to prove that connection.

With mobile chess apps, you can find opponents from around the world. You’re automatically paired with people of a similar skill level, so you’ll get the perfect balance of challenging but fun games.

Sudoku is all about analyzing. Trying to find the next number is like trying to find a four-leaf clover, and that concentration practice is generally considered good for mental function. Doing a sudoku puzzle is very similar to meditation. You sit quietly and focus on one thing for a duration, which is almost the definition of meditation. So analytical games like sudoku have many of the mental benefits of meditation.

There’s more and more scientific evidence being found that shows a correlation between the meditative state and slowing down the aging process in the brain. Specifically, meditators tend to have less grey matter loss than non-meditators. This could mean that solving meditation-inducing puzzles helps keep your brain sharper and younger.

Crossword puzzles generally deal with the cognitive function of recall. Since most crosswords have answers from many different categories, you have to recall a large variety of information and experiences to solve them. This can help support memory and recall because it helps make new associations and pathways. And since crosswords require a limited answer that has to fit into the puzzle, you don’t just have to recall an answer to the clue, you have to recall all the answers to the clue until you find the one that fits. Crossword puzzles are the inspiration for many modern brain training games.

Also known as combination cubes, Rubik’s cubes are a fun brain game for people who like something more physical. They’re compact, so they make great traveling puzzles, and you can get a mental workout in wherever you go. If you get bored of the classic 3x3, you can always challenge yourself by leveling up to larger cubes.

They likely help support cognitive function by helping your brain practice creating new neural networks. This happens because each time you try a new action to try to solve the puzzle, your brain has to keep track of what that action did. Playing around with these kinds of puzzles generally activates parts of the brain associated with this process, giving them a good workout.

A book of logic puzzles is a good place to stick your nose if you're looking for a mental challenge. Whereas most other brain game activities help support cognitive function by strengthening your brain, logic puzzles are about cultivating a learned way of thinking. These puzzles are usually some kind of riddle that requires you to think of a problem from a different angle. The skill of "thinking outside the box" is called lateral thinking, and learning it can make you feel like a genius. Lateral thinking teaches you to throw out unconventional solutions if they aren’t working and find more elegant ways to solve problems.

A study found that dementia was 15% less prevalent in seniors who reported regularly playing board games, but the reason for this might not be what you expect. The researchers think the correlation between playing board games and decreased mental decline is due to the smaller number of depression cases among board game players. So basically, they think board games make you happier and that helps support your cognitive function.

Board games generally aren’t as mentally taxing as games like chess, but they can still be beneficial for your mental well being and brain function. The fun and social experience of a board game connects you with others, which has shown to help decrease the risk of mental illness.

Recently, there have been an influx of brain training apps that generally compile many brain games into one place. They usually incorporate different types of cognitive skills and will "test" your acuity in each. The games they provide are fun and may help increase mental sharpness, but the apps often make a lot of unsubstantiated claims. It’s important to remember that these apps are not necessarily scientific and approach them with skepticism.

Posted on
Thursday, June 3, 2021
by
Bethesda Senior Living
« Go Back